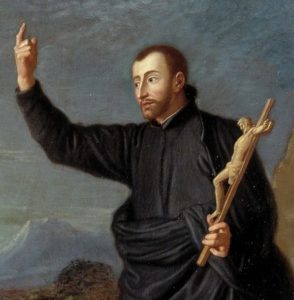 St. John Francis Regis, the great “father of the poor,” was a Jesuit evangelist and preacher. He was born in Font-Couverte, France in 1597, the son of a rich merchant. John studied at Beziers and was accepted into the Society of Jesus in 1615. He also studied at Cahors and Toulouse and was ordained in 1631. The rest of his life was spent preaching and establishing charitable institutions, confraternities, and missions in southern France.

St. Regis was not only a profound preacher, but the founder of orphanages and improver of prison conditions. He also established a lace factory as a form of skilled labor for repentant prostitutes. John-Francis worked intensely with the neglected until, suffering from exhaustion, he died at the age of 43. He also performed many miracles.  He was canonized in 1737. His Feast Day is June 16. He is the patron saint of lacemakers, medical social workers, and illegitimate children.

For a more detailed overview of his life and ministry, please read the following recent article about him:  St. John Francis Regis